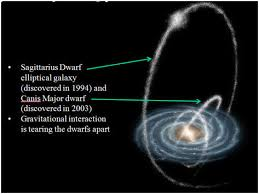 n February of last year when I wrote an article talking about EU theory (https://alsionsbells.wordpress.com/2015/02/11/swimming-through-a-head-full-of-ideas/) and the birth of the planets in the solar system according to ancient legends and records, I did not have this interesting piece of material to add to it. It seems we may be from another galaxy - our entire solar system. ( http://viewzone.com/milkyway.html )

hich would explain why we see the milky galaxy at an angle in our sky. It seems that we are a binary, having been captured by Sirius and pulled out of the Sagittarius Dwarf galaxy, into the milky way. This causes us to spiral in our head long movement in our rotation around the galaxy. 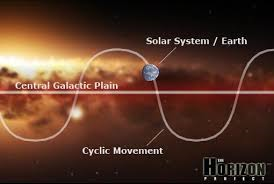 urther we have been, as we settled down into the milky way, riding the electrogravitic waves in the spiral arm of the Milky Way up and down thru the plain of rotation. 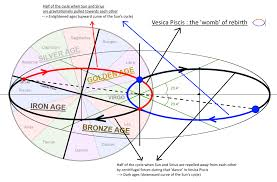 hich is then explained by procession. When linked to Sirius we then have our grand year. http://www.mondovista.com/endtime22x.html .

This is observable by looking at the barycenter (https://en.wikipedia.org/wiki/Barycenter ) of our solar system.

Here's how it works.

The barycenter is not a single point in the Sun. Because the Sun is a rotating gaseous sphere, the barycenter forms a vertical, cylindrical "sleeve" that is partially inside and outside the main solar body. All of the planets have such a "sleeve," one inside the other, depending on their relative mass and the location of their barycenters. The particular sleeve representing the mass of Jupiter intersects the solar surface at 35.9 degrees North and South. This is precisely where sunspot and flare activity begin and end during each 11 year cycle.

The new cycle has already begun with the recent observation of a solar spot with reverse polarity. But some surprising activity on March 27, 2008, showed some huge eruptions with M-class radiation at about the equatorial region of the Sun. [ See Solar Map]. These surprising eruptions suggests a barycenter of disturbance from an object even more massive than Jupiter, placing the "sleeve" outside the Sun. Could this be the beginning of the Galaxy's effects (keep reading to learn more about this) on our Sun?

Which brings me to this statement. December 21, 2012 was simply the date when our transition into the Milky Way galaxy and its gravitational field became complete. Then end time date is when we officially left the Sagittarius Dwarf system. It was our official adoption date.

We of the overarching Sagittarius Dwarf Elliptical Galaxy have finally come down next to, and even with the massively powerful spiral armed equatorial plane of the Milky Way Galaxy.

In our movement through space, our Earth has now fully begun to respond to the more powerful galactic energies and electro-gravitational bias of the massive Milky Way. We have reached the higher energy equatorial disc region of the massive spiral arm. We have now been "adopted" by a new system, a stronger and more powerful system, and we can expect changes on almost every level of energy.

The "marriage" of our birth galaxy with our new adopted Milky Way galaxy is causing energy shifts that are obvious just about everywhere. Here are some changes being watched by scientists: 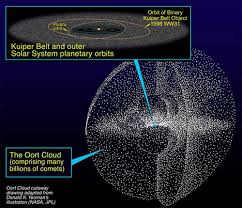 think in this process we may pick up hitchhikers like planet 9 and its families, because just look at the mess we brought along with us when we were adopted - but as to the repeat of the old cycles - I am not so sure that will happen. What I am certain of, as with all creation, life is messy. We can be assured of meeting all sorts of things we never thought of, because, we do not live in a glass bubble, we live on a planet in a solar system that is a binary, speeding through space in a spiral on an arm in a galaxy that has newly adopted us and we are in that period of adjustment that all adoptees go through before it all settles down.

And just because I couldn't leave it alone, IMO the increased energy density of the Milky Way galaxy plain is the energy wave we have been looking for that will raise our consciousness levels to match the new frequency she vibrates at, and thusly, we will have our new evolution of human  consciousness. So, it wasn't so much a doomsday apocalypse as it was finding a whole new family.