This is just a short piece, and only because it occurred to me last night in relating this story to friends we had over for the official break out of the grill, that there was some high strangeness going on. When you have a husband that you report a sighting to - that fulfills some nuts and bolts requirements like erratic movement and his only retort to that is - "It was drones.", you kind of get used to discounting the high strangeness factor. 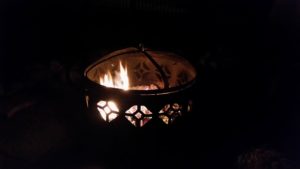 We were sitting round our little fire pot in the dark talking after dinner and I'm not sure I remember how we got on the subject, I recounted how strange the house has been in the last month. Now mind you, we have a security system that logs every door and window opened and closed where they were and what time they were moved or opened and for how long, whether the system is armed or not. There is an app on your phone that you can check anytime you want to see what has been going on at the house while you were away. My husband is a geek - stuff like that appeals to him… me, on the other hand I will not arm it while I am home, or I will set it off. Yeah.

It is no secret that I am grandson transport during the week. I leave at about the same time and I come back around the same time. I always check the dogs' water bowl before I leave - to see if I need to replace water. They barely drink while I am gone, so I leave it only half full. 3 or four times now I have walked back in and the bowl has been fresh, brimming to the top. The first time I was kind of surprised thinking - huh, I don't remember filling that. The second time I got suspicious. The third time I called my husband and he checked the app and assured me the doors and windows had NOT budged in that tone of voice that intimated maybe I had had a parts-heimers attack… Well, I was sure of what I knew. So this week, it happened again. I came in from delivering my precious cargo and the water bowl was brim full. Someone had even cleaned the bowl. So, like an idiot, I called the hubbs again, and proceeded to hear the same rigmarole from him. I was pretty miffed when I hung up.

I have a salon in my down stairs. I do hair for people on the weekends - my clients who, when I quit the salon, refused to quit me… The door to the salon is ALWAYS kept closed because the cat seemed to think the drier chair was a good place to stretch his nails on and he was making a mess out of it. That day I walked into the salon to get something. We had taken the closet doors off and mounted a salon sink on the closet wall as it backs up to the powder room and it was the common water wall. I have storage up above in the closet. In between some boxes on the top shelf lying flat is tissue paper - or well it used to be there. I walked into the room and it was on the floor. Remember the door has been shut - is always shut unless I am in there. 10 minutes before that I had been told I had an airy-fairy head for thinking the water bowl was too full.

So, I took a picture of all the tissue paper and texted it to my husband with the caption, "Further proof this room has been closed. That paper was UNDER boxes. It couldn't have moved on its own!"

His smarty reply was one word: "earthquake"… To whit if that man had been anywhere near me, I would have made him suffer.

As it was when he got home, he looked right at me and said, "So, tell them to stop!"

I said, "Not on your life, anybody who has enough kindness to water my dogs is welcome!"

It's been interesting. At least I can say that nobody has been bringing me ancient teeth….