I had a very enlightening experience while at CITD. In my last article I explained how I wished we were just a bit more enlightened… well, kinder. It is now my opinion that we just might be, but we are tricked into thinking we are not. A lot of thoughts and realizations, teachings came my way over the weekend.

Friday I was disheartened. Granted my body had kicked my proverbial butt because of the heat. Did I mention that it was hot? 144 degrees hot. I live in Indianapolis where hot is 90 degrees. I got heat stroke and wound up missing the fader party on Friday night, crawling into bed and passing out. What did not help my state of mind was that, IMO there was a sort of psy-op being run on the whole place at CITD. The way I figured this out was through noticing-the-difference.

I'm going to preface this by explaining how I do live at home. I spend much of my time in a lovely environment free of a lot of the garbage that people generally have to put up with. On my property, which is not large by any means, I have large trees that love us. They talk to us - they were happy when we came back. I have my three dogs that I love and they love us. I have a 30 pound monstercat who is at this moment sleeping on my mouse pad. The light streams through my studio when I write in the morning (my kitchen…lols) and it is quiet and lovely. It has been quite some time since I have been to a gathering of 4000 people and never in that kind of heat. So on Friday I was wondering if it all just me.

Saturday I started to 'think' about it, take it apart in my mind, analyze it, wondering why. I was sitting in the Fader Camp to the left side of the doors to the Sanctuary. I came late to avoid as much heat as I could - I wanted to see Jimmy Church's panel and I had a class with David Wilcock in the Sanctuary after that.

While I was sitting there Gabe finally arrived. He and Cheri had travel problems. It was a happy thing to finally say 'Hi!" in person. So, Gabe begins to pull his hand-made orgonite out of his back pack. He had made a ton for the conference. I had been sitting for about an hour before he arrived, just feeling the vibe, trying to figure it out. His smiling happy person puts a piece of

organite in my hand to see. I took about 30 seconds and I suddenly noticed the bottom dropped out of the 'vibe' that I had been examining. I was astonished. I immediately told him I needed to have that piece. I was defragged and stayed that way. That set me to thinking about the behavior of all who were clustered around the Sanctuary, where Fader Camp was.

Some back story on Organite -

Orgone is a pseudoscientific[1][2][3][4][5][6][7] concept described as an esoteric energy or hypothetical universal life force, originally proposed in the 1930s by Wilhelm Reich.[8][9][10] As developed by Reich's student Charles Kelley after Reich's death in 1957, orgone was conceived as the anti-entropic principle of the universe, a creative substratum in all of nature comparable to Mesmer's animal magnetism (1779), to the Odic force (1845) of Carl Reichenbach and to Henri Bergson's élan vital (1907).[11] Orgone was seen as a massless, omnipresent substance, similar to luminiferous aether, but more closely associated with living energy than with inert matter. It could allegedly coalesce to create organization on all scales, from the smallest microscopic units—called "bions" in orgone theory—to macroscopic structures like organisms, clouds, or even galaxies.[12] From <https://en.wikipedia.org/wiki/Orgone>

Better known as the aether/ether/ZedPF (zero point field)… It has been found that this can be focused and directed by shapes in the environment, or created shapes with various materials and that it acts like a fluid. There is a man called Dan Davidson who has a downloadable PDF all about this. When you read it, you begin to understand and see shapes everywhere in nature that are gathering and funneling this free energy everywhere.  www.free-energy-info.com/Davidson.pdf 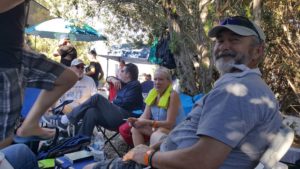 Fader Camp was close to the sanctuary. The Sanctuary is shaped like a pyramid, in fact the whole place is covered in them! https://alsionsbells.wordpress.com/2016/05/12/frank-lloyd-wright-ley-lines-aquifers-and-pyramidal-shapes-citd-2016/ The Sanctuary is about the highest point in the compound. We were sitting outside in the energy field of a huge generator. I couldn't see the angle of the structure, which matters. (See David Wilcock's research of pyramid shapes.  1.) Either way we had a generator and attractor - all rolled into one. That created no little effect upon the environment.

So here's the thing, orgonite has the ability to change the frequency/range of energy by directing it. I didn't really grasp how profound this was until Gabe sent me a 72 degree pyramid that he made for me.

I had asked for a shape that would generate life force and emit it to my surroundings to benefit my home environment. It took me about three days after it arrived to really understand just how well it works! I am on eastern time, so the end of Jimmy's show is at 1am. I am always crashing afterwards. With this pyramid sitting anywhere within 20 feet of me, I am wide awake with a mind full of thoughts and ideas. Going right to sleep is not an option for at least an hour and a half after leaving the vicinity of this shape! Also, if you can manage to fall asleep in its vicinity your dreams are far more vivid and you wake with tons of energy!! So, the orgonite that Gabe brought was made with metal and has another purpose - to absorb energy - specifically artificial energy - manmade created frequencies like cell phone and microwave stuff and the like. When I put that organite piece in my hand I was finally able to feel another quieter vibe under the louder fractious one that was causing all the havoc amongst the people by the Sanctuary. That is because as soon as the orgonite touched the palm of my hand it all went quiet, the orgonite absorbed, or changed the overlay of that frequency - namely manmade (!!) energy. That was all I needed to look at the situation differently. BOOM!

By the way, here is Gabe's site where you can order his orgonite: https://www.etsy.com/shop/Gabrielsmysticalarts?ref=hdr_shop_menu

I thought, 'How interesting!', but of course, I waited to see if I could put some more threads together in my psyche before I said anything. One thing I did notice is that it was much stronger by the Sanctuary - maybe because it was on the highest ground, or maybe because of its shape, or both? I don't know. But I did find a huge difference between the amphitheater, which is lower and the Sanctuary. People at the amphitheater were much less frazzled and way more relaxed. Saturday night we had all sorts of guests show up at the Fader Haus - (Jimmy is my hero for this!!!) and I was very lucky to have been able to speak with an authority on psy-ops and sensitivity in general and clarify my thoughts. I have since asked him if I could say who it was but I haven't heard back yet, I do not want to wait on this article, so if I do hear from him, I will blog it later. Suffice it to say, his confirmation of my perceptions made my idea on this even clearer. Thank you, Sir, if you read this, you know who you are!! (grins)

I spoke with Holly Cook about it because of what I heard her say on the show Wednesday night. Her take on it was thus:

"I have been to Contact 3 years in a row. The first year we were hit with a microwave and everyone became really agitated and angry. There appears, in my experience, to be a pattern that Friday is fine but Saturday brings a profound energy shift, and not always for the better. While I do believe that psy-ops attacks are very real, I also believe that as a collective group we should be consciously aware enough to create a positive, heart based "grid" to deflect the attacks. It is also common for our energy fields to feed off of each other so if we are not being responsible with our thoughts we shoot out negative vibes that reach those around us and create more havoc."

I could not agree more! (you all know this because of my article before this one.)

Then there was this conversation in twit last night that I thought was apropos:

@danlopez2012 I am beginning to think that the 'matrix' is more responsible for the veiling than anything... not some supernatural/natural source

@alsionbell yeah, getting similar about the paranormal being conspiratorial. Some of it is like just being messed with #F2B

You didn't have to be at CITD to notice…

What more perfect a place to mess with people's heads, create a fractious vibe to keep separated like-minds and information sharing from happening, than at this place for this reason? I'm even beginning think there was a bit of weather mod going on to just enhance the whole effect. I mean, I've gone this far - why not? I checked the weather maps today and the temps are back down into the 90's… ahem.

And this morning I read my favorite Daily Vitamin R: Jon Rappaport and find this:

The key is having the tools to analyze realities, take them apart, and apply logic and other critical methods to these structures.

This goes beyond formal logic. It involves the assessment of probabilities, for example, where vital information is being hidden from us.

The cults in charge of selling false realities try to bypass the rational mind and instead covertly appeal to automatic reflex functions.

The most important of these reflex functions is: investing emotions in presented images. This is the primary strategy of informational mind control on the planet.

If I didn't know myself, if I hadn't spent some time learning to dissect my perceptions and my emotions, I would still be very confused as to what happened this week end. What if everybody there was reacting to this overlay that seemed to purposefully create a separatist vibe? Once I understood, I was fine - it all clicked into an 'I-get-it' frame of reference and I was no longer confused. I was determined to send out a better vibe in the face of all the what-ever-it-was. By Saturday evening it was all better. When you notice this, you can 'just say no'!

I think Jimmy Church has it right. He is a force of nature to be reckoned with. By conscious decision alone he determined to be positive and stay positive, because he simply refused anything else to enter and create in his reality structure. I watched it happen. I watched him transform everybody around him for the better, one way or another. He was not merely receptive to the whole experience, he was determined to be a creative force in the overall picture. He came to open minds and create an upwelling of opened eyes. And that he did! We are all right in various ways about this being the year of the revealing - and it is all of us in our hearts and minds opening wider to reality and our ability to create it as we swing along, that is this thing called disclosure.

Disclosure has arrived, and it is us.