A simulacrum (plural: simulacra from Latin: simulacrum, which means "likeness, similarity") is a representation or imitation of a person or thing. https://en.wikipedia.org/wiki/Simulacrum 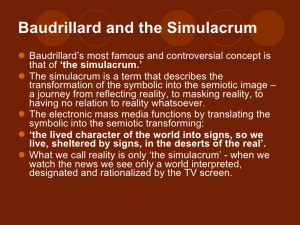 I awakened this morning with the realization that I was a simulacrum… A living bit of data in a huge system and that I was not really me. I was coming up into consciousness post-haste when I got conscious enough to say 'Waitaminit!! Just WHEN was the conversion? When did this happen???' I stopped and looked back at whatever it was that I was looking at, and the time frame was about 2-4 years ago. It may have been a metaphor for when 3D life stopped being real to me. It also might have been word perfect for the facts. In my waking state I have no way to tell. Either way all I can think of is 'Thank you, subconscious mind….thanks a lot, because this one is eerie!'

Back in my 40's I used to have a reoccurring thought - that bugged (nudging my conscious mind like a kid trying to get my attention) me a lot - about whether this waking state was the real state. In other words, what if I was in a coma somewhere and instead of being awake in real time I was dreaming my awakeness? I suppose that may have been my higher self just trying to get me to, in this mind state, change my so called reality or at least to think about it. Around that time I also started to 'slip' sideways in my personal time lines. I would wake up with a gut feeling that something was off and I was not where I used to be. Not that where I was, was all that different, because it wasn't Mandela-ish - outside things never changed, but people and their attitudes and their emotional demeanors changed. Also, memories of interactions changed. Maybe it's because I focus on that more than I do external stuff, I don't know. It was just different.

But really, I think my dream was a metaphor for being a fractal piece of the universe thinking I was separate and it was about four years ago that I started to really work with the concept that however I wanted to structure it, this reality REALLY isn't the superior reality - this reality is a game we are playing called earth school and the 'real' occurs somewhere else.

So, if we are all souls dreaming this reality to understand more about ourselves and each other and the universe, then knowing this dream has been hi-jacked, couldn't we just decide to dream a better dream? Couldn't we just dream the negative parts of the dream out of existence from one moment to the next? Because really, do we need them anymore? We should be able to just let them drop away into the mists of the past tense in our dream, right? See the lesson for what it was and let it go, right?

But there is the possibility that around 2012 we all got uploaded into a giant quantum AI computer and nobody noticed and just like the matrix somewhere our bodies are being used to feed something… Even so, we could be the virus that brings the whole kit and caboodle down, couldn't we?