Recently a lot of posts have been up on face book and for the last several years, videos on You Tube on Planet X with a fervor of belief and dire messages of doom. The possibilities are endless, the disinformation is ubiquitous (present, appearing, or found everywhere) and even our best researchers have bowed to the pressure of doing articles on this subject.

This was recently all over the place: 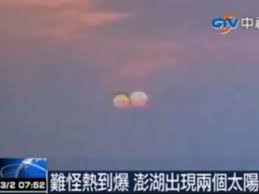 Weeks after a story shot across the Web claiming that the imminent explosion of a nearby star would result in the appearance of a second sun in the sky a story that was later debunked two suns were caught on camera yesterday in China. The suns one fuzzy and orange, the other a crisp yellow orb appeared side-by-side, one slightly higher than the other.

What's going on? Life's Little Mysteries asked Jim Kaler, the University of Illinois astronomer who squelched the excitement over the aforementioned exploding Betelgeuse and who has written books on the day and night sky. The double sun image is an effect of optical refraction, he said, but it's a "pretty darn rare" one, and one not fully explained by science.

"I doubt it's been computer modeled," Kaler said. "There must have been some blob of atmosphere somewhere that caused this truly spectacular phenomenon, which in a sense is a mirage." [Will Betelgeuse Become a Second Sun In 2012? ]Â

Mirages appear when particles in the atmosphere refract, or bend, light. This typically happens near the horizon, where air is thicker, though, and mirages are usually aligned vertically above or below the original source of the light not beside it, like in the video. It's possible, Kaler said, that an unusually thick patch of atmosphere wandered in front of the sun to create the unusual effect.

Previous sightings of horizontally-aligned double images of the sun and moon are recorded in a book called "Light and Color in the Outdoors" (English edition: Springer 1993) by the famous Flemish astronomer Marcel Minnaert, which remains the most complete reference on double suns. "So many other instances have been reported that there is no longer any doubt about ... observations of sun and mock sun(s) being at exactly the same altitude," Minnaert wrote. From <http://www.livescience.com/33093-chinese-two-suns-video-unexplained.html>

As one person who's research I have always trusted and respected, Linda Moulton Howe has weighed in on this subject quite a bit recently. Here is a video where at about 1:27:25 Linda speaks about her interview with Caltech's Mike brown https://www.youtube.com/watch?v=QpWEFk80d-o

And here is her article on Earthfiles that has the audio of the interview with Mike Brown plus analysis. Here also is her excellent link to her Coast to Coast presentation of this material with George Noory

In a response to a Face Book post I made asking our Faders what they thought, our very own Dennis Koch Said "In Canada, this particular type of sun dog and moon dog effect is rare but it does occur. The intensity depends on the ice crystal content in the air or the moisture in general. I've seen this this effect where it does appear a double sun has occurred, while any reflection of such object will be sharp enough to reflect. I've also seen people who have never seen this effect in their lives freak out. Hell, I've seen people freak out over intense northern lights - where the lights drape the sky horizon to horizon, turning everything a hue of green. On the prairies of a northern Canadian winter during a clear morning, you can judge by moon dogs what type of weather is going to follow over the next few days. I've rolled my eyes when pictures are posted online of a smaller sun almost beside the real sun. It's planet X everyone screams. No, it's a smaller sun dog and usually means the weather will be fine that day after low level frost crystals dissipate. Higher level ice crystals usually foretell of mean weather days to come and the sun, or moon, dogs are further apart. Refraction was one of the first things you learn about in high school. I am so surprised no one remembers their basic science."

Mark Torana said, "Agreed. In some of the over water shots, the intensity of the second object should be enough to see a reflection on the water. We don't see it though. Hmmm. Seems this phenomenon only occurs when the sun is low to the horizon and attenuated by the atmosphere. In saying that, both objects should be." (I want to thank the faders who took time to answer my question… Thanks guys! As always you are the best!!:)

The back clutter on this subject has all stemmed from Zachariah Sitchin's writings. Recently in an interview on Gaia TV Corey Goode stated that the inner earth civilization he was privileged to meet and converse with also reported on a tour of their library that Sitchin's work was inaccurate. Stillness in the Storm has written several excellent articles on this. I like this quote the best. Check out the references he gives. I did they were very thought provoking.

[In preparation for this analysis, I reviewed several items on the sitchiniswrong.com website. As CG said, Mike Heiser, the author of all the material, has a clear distaste for Sitchin's work But if one can look past these incendiary statements, there is a great deal of raw data presented so as to exercise one's personal discernment on the matters at hand. In the below-linked article, I provided one of Heiser's papers on Nibiru.

Related Zecharia Sitchen Was Wrong? | The Myth of a Sumerian 12th Planet: “Nibiru” According to the Cuneiform Sources

One piece of commentary I'll offer when it comes to the study of ancient languages is that interpretation is not objectively concrete. Meanings are usually agreed upon by consensus, becoming rigid systems of interpretation; so the risk of errors compounding into major discrepancies is present.

As outsiders trying to make sense of who are what to believe, resting our conclusions with absolute certainty on experts, whether Sitchin, Heiser or Kaaree is not advisable. The method I personally employ is to listen to all with an open mind, yet believe none without question. This way if new information emerges my reality bubble won't be sealed against it. From <http://sitsshow.blogspot.com/2016/02/cosmic-disclosure-season-3-episode-6.html>