Ok, I may have jumped the shark a bit these last several posts, now I'm going to jump into the other side.

Yesterday, I really understood that we are trapped here/ held here/ stay here with in this resonance field for any number of reasons, the most important one being that we choose it. When you put David Icke's info

on Saturn together with the information of the gravity field of the earth, From 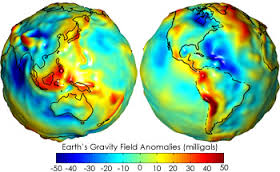 37th parallel… and look at it from a cymatic point of view, all of a sudden something leaps out at you.

If as I quoted Bohm, that matter is frozen light (frozen meaning a very low frequency of the electromagnetic field), 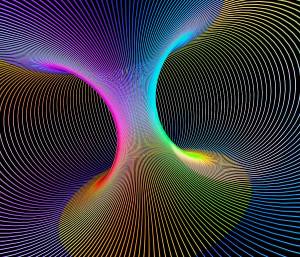 If we abide by the rules of Science, which aims to unite a posteriori / empirical evidence from our Senses with a priori reason / logic from Principles, it is clear that we can now describe Matter (Reality) more simply in terms of Spherical Standing Waves in Space (rather than discrete particles and forces in space and time).

The purpose of this website is to explain and solve previous philosophical problems that arose because of the wrong metaphysical foundations of our language (currently founded on four separate things - Matter as 'Particles' generating 'Forces / Fields' in 'Space' and 'Time').

To unite these four separate things we must describe Reality from One Thing. The Metaphysics of Space and Motion and the Wave Structure of Matter is founded on One Principle which describes One Substance, Space, and its Properties as a Wave-Medium.

Time is caused by wave Motion (as spherical wave motions of Space which cause matter's activity and the phenomena of time).

The discrete 'particle' effect of matter is formed by the Wave-Center of the Spherical Waves. (See Wave Diagrams)

Forces / Fields result from wave interactions of the Spherical In and Out Waves with other matter in the universe which change the location of the Wave-Center (and which we 'see' as a 'force accelerating a particle').From <http://www.spaceandmotion.com/Physics-David-Bohm-Holographic-Universe.htm> 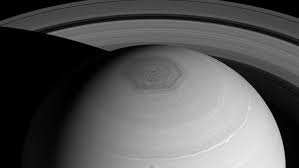 But if we knew that, it would be too easy to figure the puzzle out and open the door to the trap that on earth that is controlled by Saturn, who is cymatically a 6 - and electromagnetically a 6 harmonic. Six you say - how so? Simply witness Saturn's response to the solar wind in the storm at its north pole which is a hexagon.

Our bodies were made to resonate to a harmonic of 6… There is a relationship there.

I imagine that once the earth had a Schumann resonance somewhere in the sixes too - but it has been in the 7's now for a long time. I would posit that it has been as long as we have been waking up… 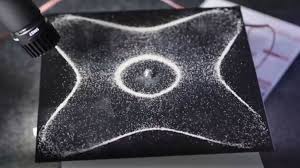 We should be able to be masters of the sixth chakra - the paranormal. We are not masters of it, we are confused. Why? Because we have been shoved into a world of corners - 4's. Even the natural music scale has been forced into 4's. (http://www.whydontyoutrythis.com/2013/08/440hz-music-conspiracy-to-detune-good-vibrations-from-natural-432hz.html) Hitler employed fours in sound waves to control his populace and make them mad.

The initial effort to make A=440 Hz the basis of standard tuning took place in 1910 when the Rockefeller Foundation issued a grant to the American Federation of Musicians to popularize the concept. The initial effort failed.

However, the BSI — British Standards Institute — officially adopted A=440 Hz in 1939, promoted by the strange consortium of Rockefeller Foundation influence and the Nazi government. Ironically, The British adopted a tuning standard promoted by the Third Reich, just as both went to war. While 440Hz had been rejected by British musicians only 3 months prior, Josef Goebbels persuaded the BSI to adapt 440Hz saying it was of extraordinary importance.

Who's to say that it wasn't a master stroke of the reptilians to keep us 'stuck' in the four's and unable to explore the 6th chakra and release ourselves from the frequency cage we are in? (You know all a chakra is, is an information center - a center of resonance. You can either tap into it or not…)

What I am leading up to here is that IF MATTER IS FROZEN LIGHT then, all of this matters, because we are being held here by a FREQUENCY GATE!!!! That damned quantum box is a resonance - a sound a frequency - information, a vibration!!!!!!!! I would posit that the only way any other intelligence can come here and visit and not get caught would be to assume the form of a sphere, (see Bohm above) otherwise, they too could get caught in the corners of this reality.

It's about geometry, about frequency. Even down to the machinery of the body. We have 7 centers of awareness - the chakras, that are frequency gates! Guess what - the top one is our SEVENTH chakra - just one higher than 6, our number, the number of the beast, our bodies. The seventh chakra is also well known to be our gate to the universe, (note the spiral/vortex) how we leave the body when we die and our crown of 'LIGHT', the unfrozen part of us that is NOT matter - not the body - but the soul that inhabits the body. Should we learn to emulate the ideas in that doorway, we can unlock it and come and go where ever/ whenever we choose. And I posit, that when we come and go from that doorway that we will also look like a sphere of light. - NOT a square.

How's that for jumping the shark?