As a philosophy, kintsugi can be seen to have similarities to the Japanese philosophy of wabi-sabi, an embracing of the flawed or imperfect.[9] Japanese aesthetics values marks of wear by the use of an object. This can be seen as a rationale for keeping an object around even after it has broken and as a justification of kintsugi itself, highlighting the cracks and repairs as simply an event in the life of an object rather than allowing its service to end at the time of its damage or breakage.[10]

Kintsugi can relate to the Japanese philosophy of "no mind" (無心 mushin?), which encompasses the concepts of non-attachment, acceptance of change and fate as aspects of human life.[11]

Not only is there no attempt to hide the damage, but the repair is literally illuminated... a kind of physical expression of the spirit of mushin....Mushin is often literally translated as “no mind,” but carries connotations of fully existing within the moment, of non-attachment, of equanimity amid changing conditions. ...The vicissitudes of existence over time, to which all humans are susceptible, could not be clearer than in the breaks, the knocks, and the shattering to which ceramic ware too is subject. This poignancy or aesthetic of existence has been known in Japan as mono no aware, a compassionate sensitivity, or perhaps identiﬁcation with, [things] outside oneself. From <https://en.wikipedia.org/wiki/Kintsugi>

THE FABLE OF KINTSUKUROI

Once upon a time, in the far, far east, east even of Eden, lived a great emperor, in a great palace, gorgeously stocked with the richest of goods. It was early spring, and the season of royal visits, when kings and princes called on one another and admired each other's choicest possessions, gave wonderful gifts and enjoyed bountiful banquets. And this year was special, because the visitors would see the investiture of his beloved son Kintsukuroi as Crown Prince of the empire.

The emperor was excited this year because he had a new and beautiful bowl to show to his friends, specially made for him by the finest of craftsmen from the finest of materials. Imagine then his horror when on going to his cabinet he discovered that it was broken apart, into a hundred pieces. How could it have happened? No-one knew. What could be done about it before the first visitors arrived? No-one could offer any idea, for the time was too short to start again and make another one.

The emperor was dismayed, sad that he could not show off his beautiful bowl, but even sadder that something so beautiful should have broken. He retired into his private apartments with only his beloved son to share his sorrow, and they talked long into the night together.

Next morning the emperor woke to the sound of a great commotion. His senior ministers demanded to see him urgently. The cabinet of treasures had now been broken into, and this time the great new golden diadem that has been made for his beloved son, ready for the investiture, was quite simply gone – along with the broken pieces of the broken bowl, but who cared about those now.

What is more, the thief had been seen, but not recognized, since he was covered in dirt and scars, with nothing to distinguish him from a thousand other down-and-outs who hung around the palace, for the emperor – to the annoyance of his ministers – refused to turn them out but shared his food with them.

No-one knew for sure where the thief had gone, but he had, they thought, run off towards the princes apartments. There the doors were most unusually now locked and there was no answer to their knocking, though they could hear sounds inside. Would the emperor give his permission for them to break down the door: they dare not act without it.

The emperor was silent for many minutes. On his face his ministers saw sadness but not anger, lament but also love. What was going on? Eventually the emperor spoke. “Leave the prince and his apartments alone. If he is ready to rule, he must be allowed to act. His will and my will are as one.” The ministers were not at all sure just what this meant, but the message was clear. They were to do precisely nothing.

So the day passed. The emperor remained in his private apartments. Those of the prince remained locked, though smoke could be seen coming out of the chimney and a fire had obviously been lit. And eventually the ministers tired of their waiting and went to bed. The important guests were expected the very next day.

Imagine now their surprise in the morning when they went to the treasure cabinet to prepare its items for display and found the precious bowl back in its place, whole again, but glistening with veins of gold where the cracks had been. Its beauty seemed all the greater. And by it the prince’s crown, a slim band now, but speaking in its simplicity of a strength, an authority all the more striking, because it had given itself away and given glory to another, but was the greater itself for it. The investiture could go ahead.

A smile of secret understanding passed between the emperor and the son whose newly scarred hands had shown him worthy to come into the kingdom.

Kintsukuroi means ‘to repair with gold’ in Japanese, and is the art of repairing pottery with gold and understanding that the piece is the more beautiful for having been broken.

There is an art to being broken, and yet more than who you were after the mending. There are many metaphors for this. The Butterfly who emerges from its chrysalis, the dragonfly larva who can now fly, ascension... we are a vessel that has been fractured.  It is the prime act of healing. It is not the limbo land of being defined by your history or your biography. It means to emerge whole and more than you were before, with a greater depth and beauty. Many times to grow we must shed ideas that are keeping us from becoming. We must change and learn, evolve into something different. This is only difficult if we stop the process. If we stop the flow - the experience of changing. This causes pain. Most of us will not change unless prodded by that pain. We tend think that pain means you are broken. But not really. Pain of any kind, physical, emotional, mental or spiritual just means you have outgrown your shell and it is time to expand. Pain is only an indicator.

Most of us walk around in a societally approved shell. We have been accultured and shaped by our lives and schooling and the laws of our land and the media, and we bounce along until that day that something calls us to awareness, or breaks our shell open. Whatever the inciting incident, which could be small or huge, we then have a choice whether to go with the flow and change effortlessly, or hang on and jam ourselves back into our safe shell. Inevitably if you jam yourself back into your old way of being, you will only be able to do so for a limited amount of time - just like a shoe that is too tight, after walking a mile or so, you are going to be in excruciating pain. Whether you decide to medicate that pain, or actually buy another pair of shoes that fit…. Well that’s up to you.

There is an art to being broken and yet more than who you were after the mending. There is a wisdom you gain with growth and confusion. There is a capacity to offer to the world a service of your insight and your compassion. There is beauty in a larger wholeness. There is a grace to our scars. There is a sacred knowing - an inner core oneness that is achieved in the healing that shines out from us when we choose to mend, an offering to others, a way-showing. There is a new strength and powerful connection to a deeper us. Where society today teaches us it is ugly to be damaged and that you will be eternally less, Kintsugi teaches us the value and beauty of the healed - the greater balance and grace of one who has become more than they were.

This is how we begin. 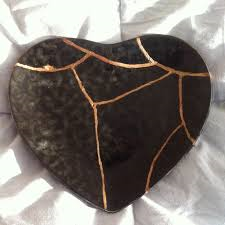